There’s a fast and easy way to search in Colorado

COLORADO: Friday, December 9 is National Lost and Found Day, and Treasurer Dave Young wants to reunite veterans with their lost money and property.

“Gone are the days of looking for misplaced items in a lost-and-found bin. Simply log on to colorado.findyourunclaimedproperty.com and get down to business searching for money or property you have lost,” Dave Young, Colorado State Treasurer and former President of the National Association of Unclaimed Property Administrators. “Our veterans, service members, and their families have sacrificed so much. Helping them find their unclaimed property is one small way we can thank them for their dedicated service to our country.”

“Losing track of items is an unfortunate part of life for individuals, businesses, schools, nonprofits, and municipalities,” Bianca Gardelli, Director of Colorado’s Unclaimed Property. “The good news is that in Colorado, we have a fast and easy way for you to search for cash or other items you may have lost track of.”

The Great Colorado Payback, by Colorado statue, does not sell or destroy military decorations or awards. Military items that are being held for the rightful owners or heirs include:

History of Lost and Found Day
Lost and Found Day was officially announced on November 19th, 2012, but the concept of having a place where people can come to possibly recover things they have lost dates back to 718, when Japanese monks included the service of returning the belongings of people in their daily tasks. In 1805, Napoleon Bonaparte opened the first lost-and-found office in Paris. Objects found on the streets of the city could be brought there, and those looking for them could go there to see if their items had been brought in. Since then, the concept has spread all over the world. Lost and Found Day is celebrated annually on the second Friday of December. 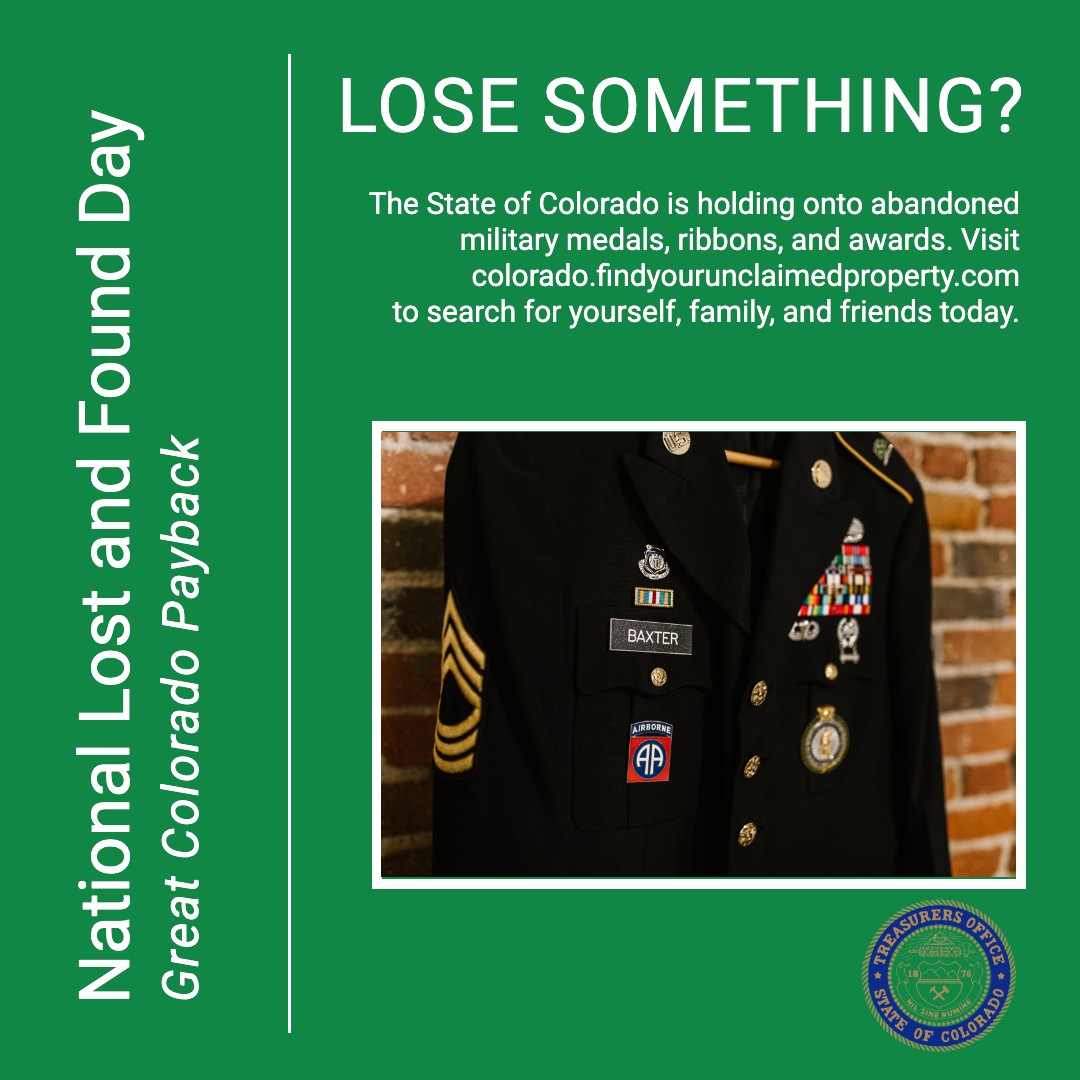 The Great Colorado Payback
Even businesses lose track of property and payments, occasionally resulting in unclaimed property which can be claimed. Corporations, municipalities, schools, nonprofits, hospitals, and small businesses are also listed among the many individuals whose assets are in the possession of the State.

Money or property turned over to the State Treasury for safekeeping is held for the owner or heir of the account and there are no time limits for filing a claim. The Colorado State Treasurer currently maintains a list of over 1.7 million names of individuals as well as schools for whom property is available, including over $960 million in cold, hard cash. To date, the Great Colorado Payback has reunited over $600 million to their rightful owners.

Unclaimed Property Laws
Unclaimed Property laws began in the United States as a consumer protection program and they have evolved to protect not only the owners, but also their heirs and estates. Unclaimed property is tangible or intangible property that has had no activity for a specific period of time. Unclaimed property includes, but is not limited to, abandoned financial assets such as stocks and dividends, mutual funds, checking and savings accounts, unpaid wages, securities, life insurance payouts, uncashed checks that are without activity for a certain period of time, as well as the contents of safe deposit boxes for which the rent has been expired for at least five (5) years. It does not include real estate or vehicles.

The organization holding the original obligation is required to make every effort to contact the owner and establish activity. If they are not able to make contact, that asset is reported to the state of the owner’s last known address.

Once the property is in the custody of the state of Colorado, outreach begins through mailings, the website, advertisements, and local media coverage.